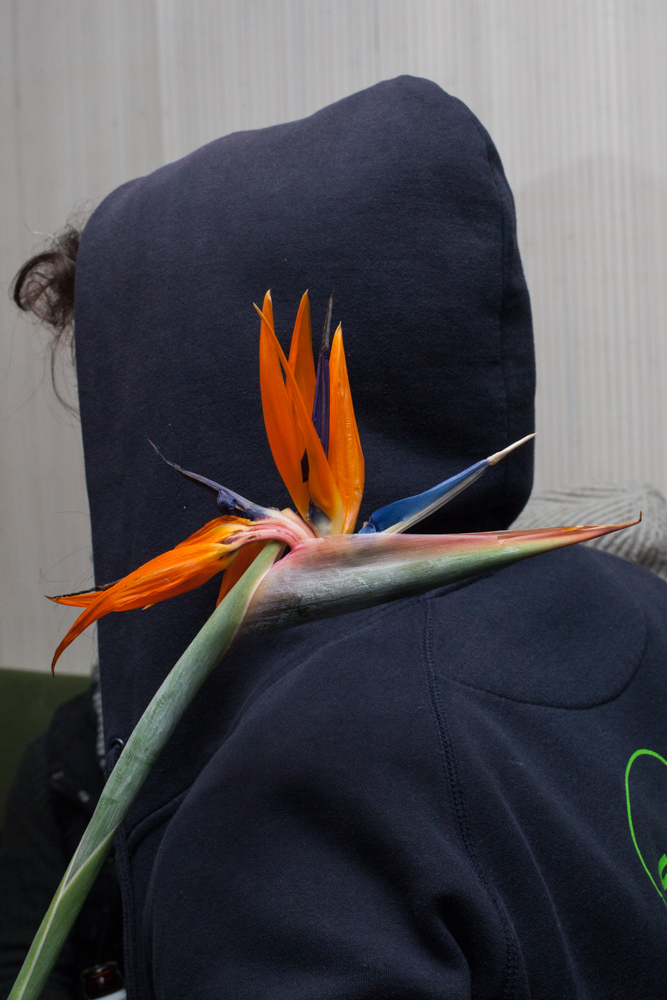 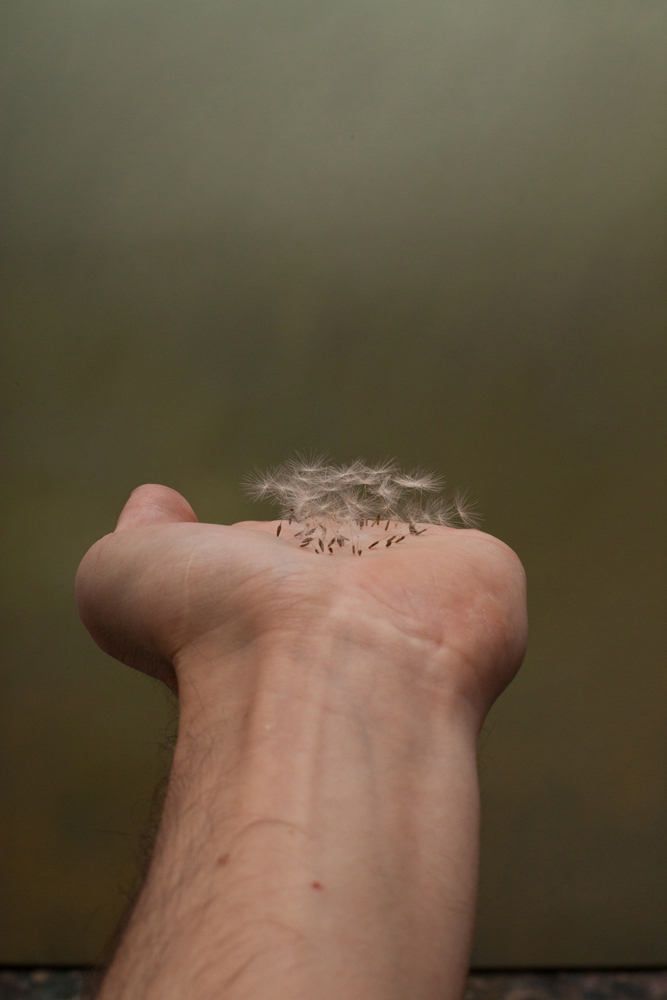 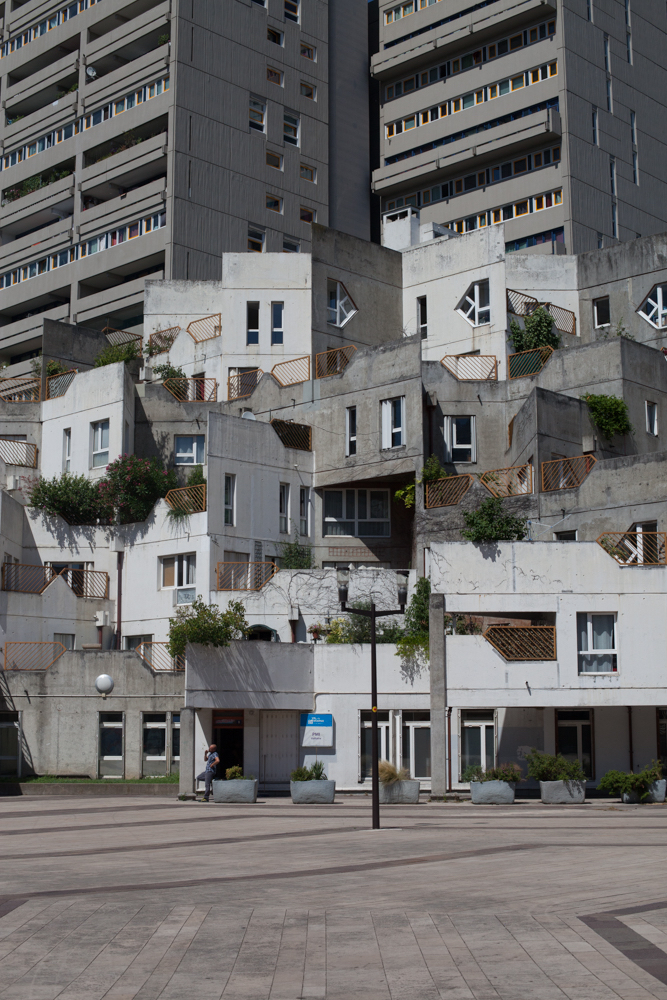 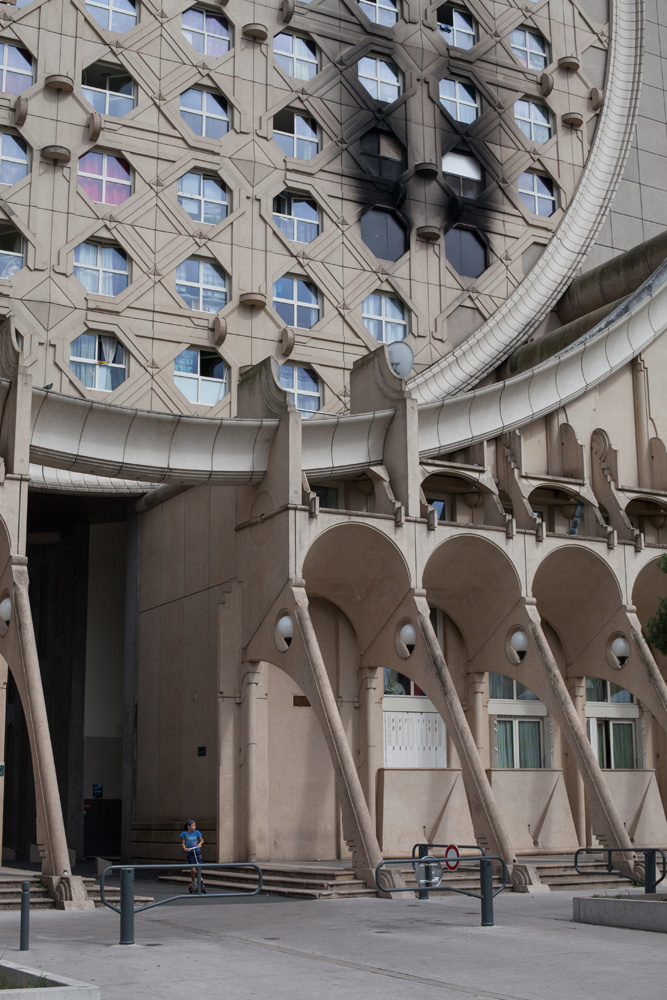 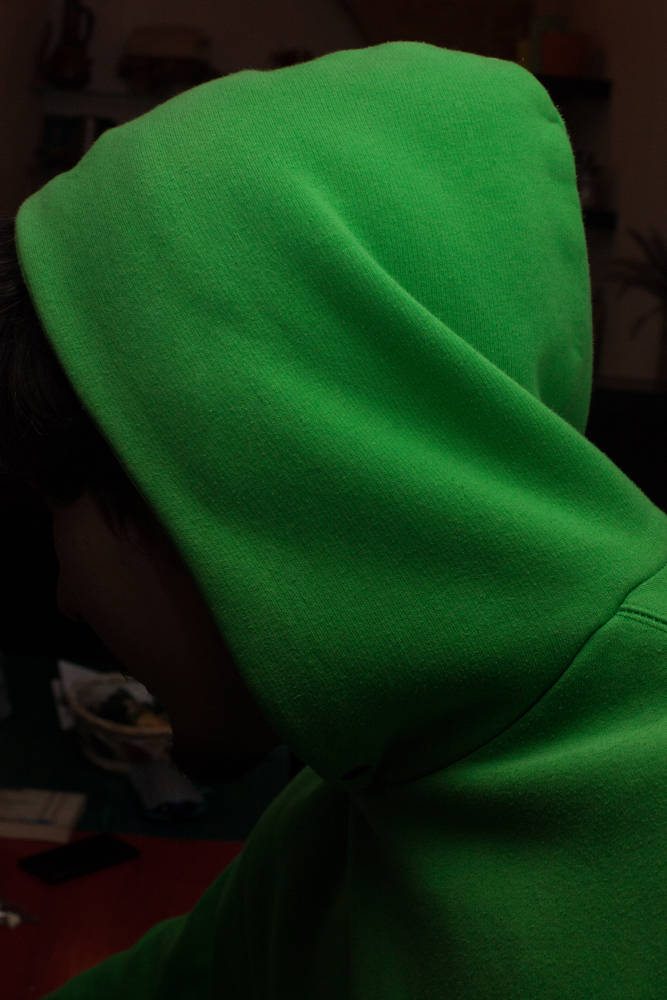 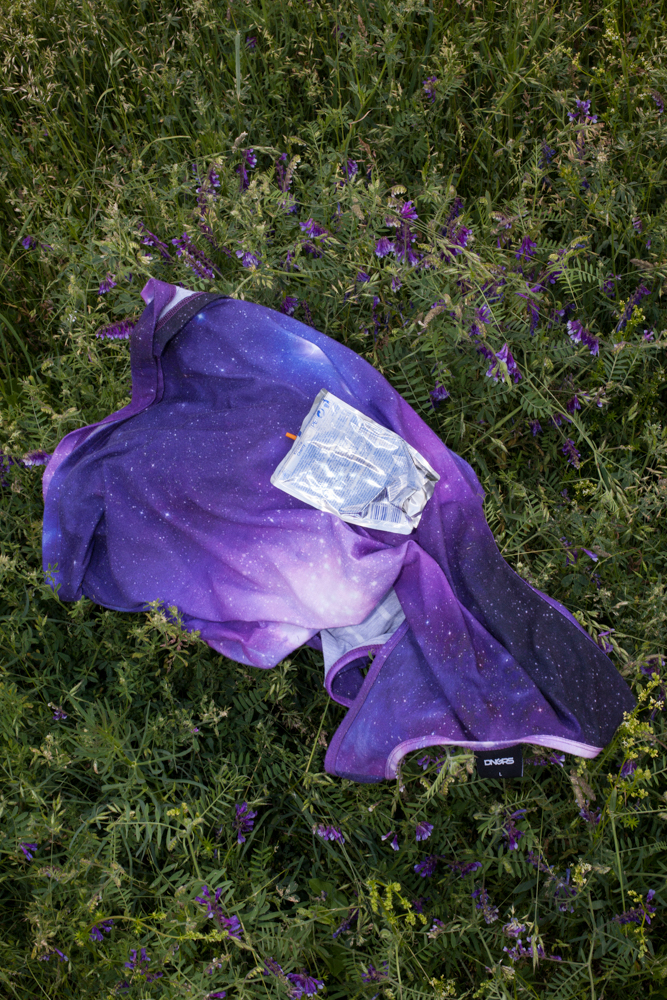 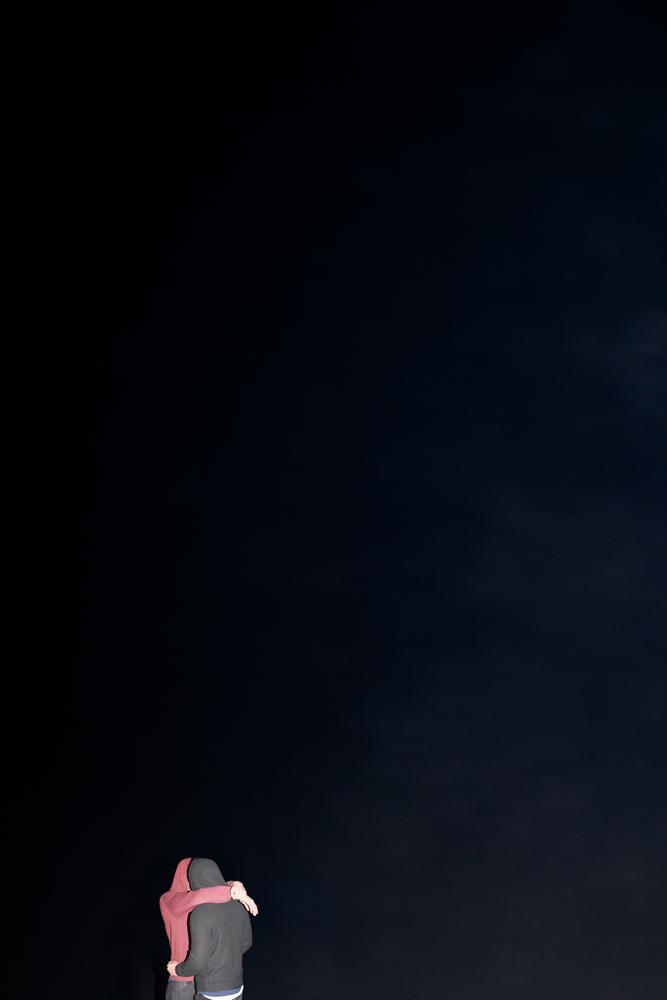 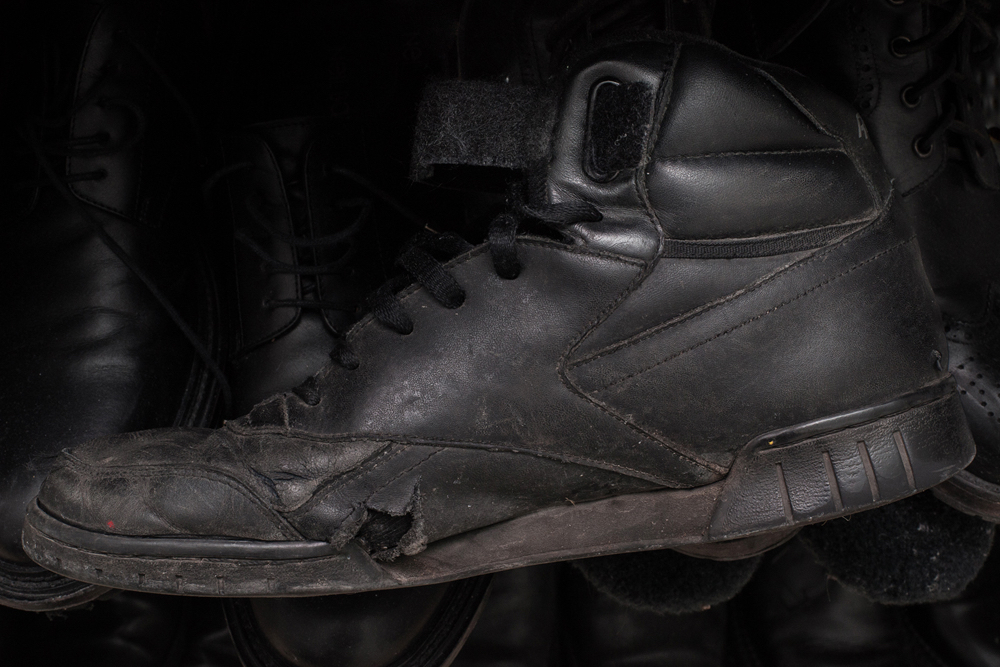 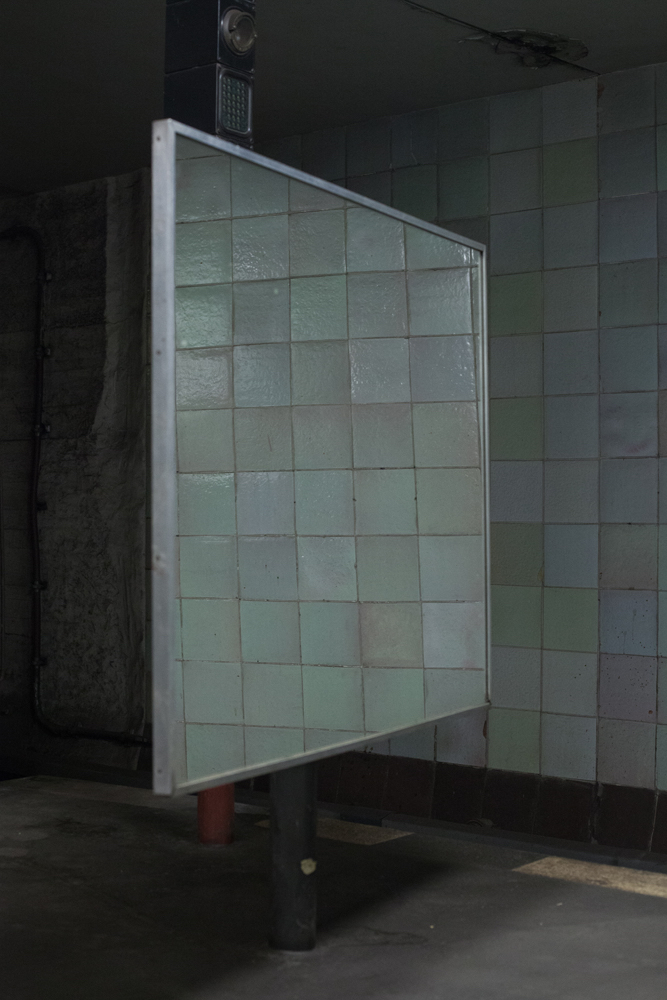 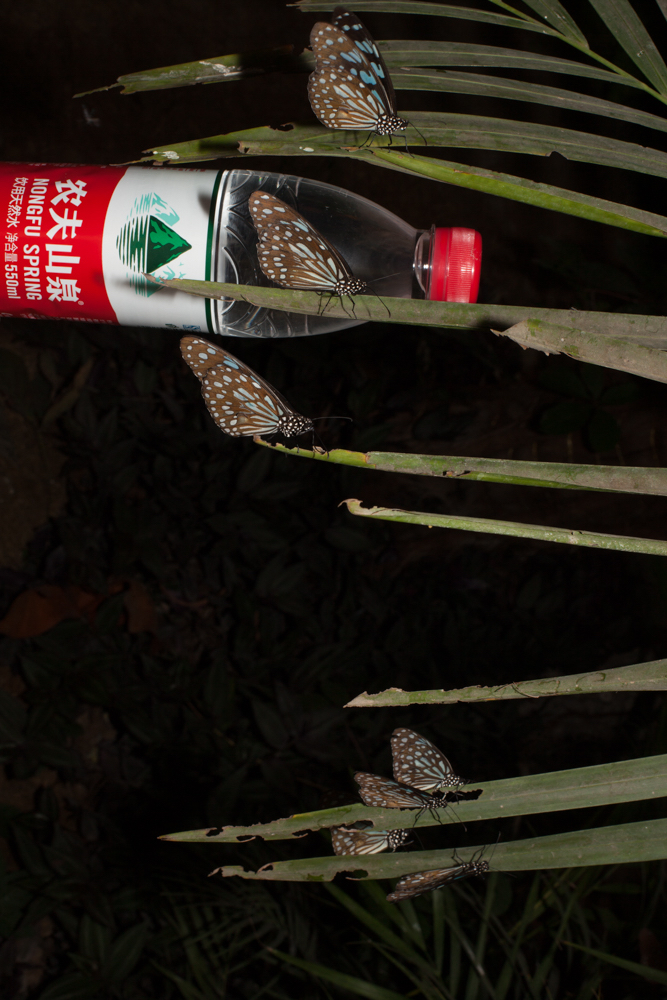 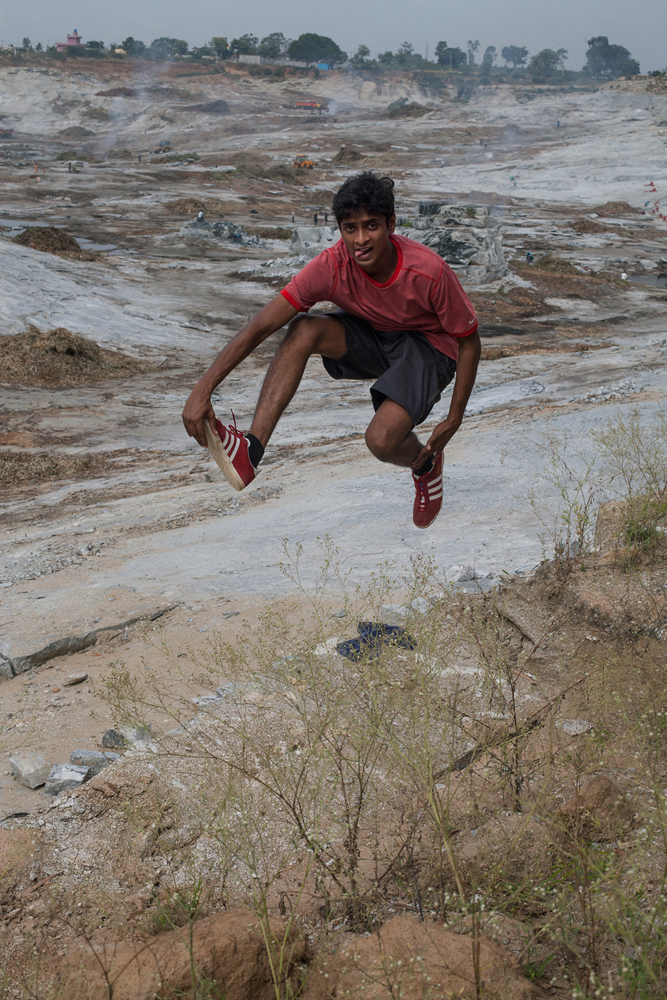 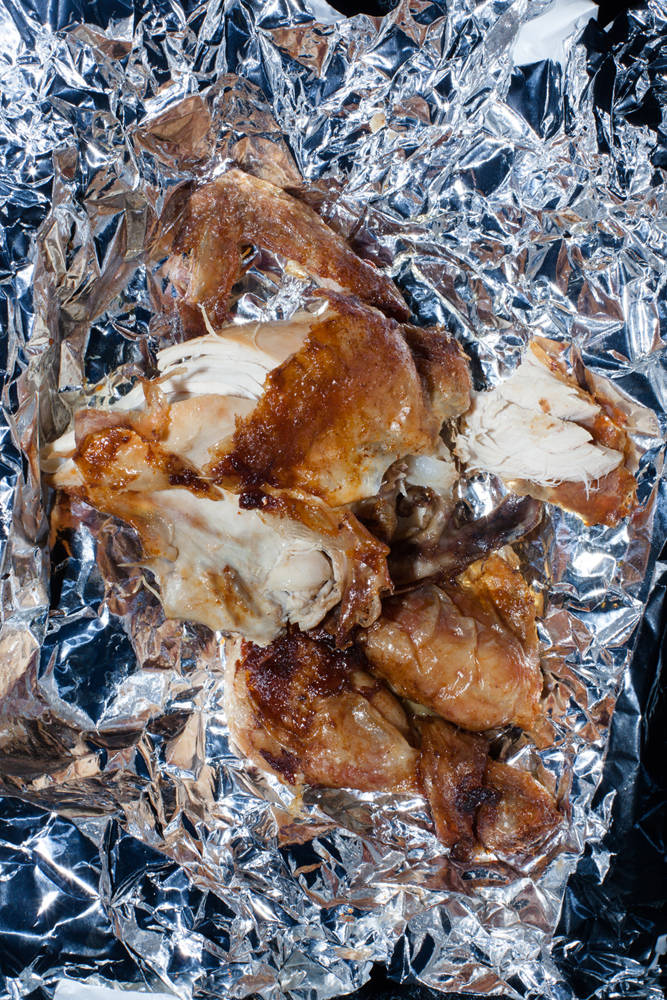 The cover says it all. The back of someone’s head, cloaked in a black hoodie, a spiky, bright orange Bird of paradise flower thrown (or rather, placed) on their back shoulder. Anonymous, mysterious – a juxtaposition of the exotic and everyday speak of the singular images in ‘Pictures and Words,’ a thoughtful photo-and-prose book from Berlin-based photographer Paul Hutchinson.

Glimpses of the ordinary i.e. faces, backs and side views of people, city junk, grey buildings are given heightened awareness in the images the German-Irish artist puts forth. In between the photos are poems and soliloquies that speak to urban experiences (‘city boys and outdoor rats’), snippets of conversations and stark observances.

Excerpt from ‘anyone still awake’

wake up dear little cushioned kids/pillowed rich, fine talkers with all your wits/get a grip

The book has the textural feeling of a November mood, familiar to those who live in Berlin or any place northern. Consider the greyness that envelopes the ennui, punctuated by occasional excitement, marking the daily grind of existence. You are here and there but mostly in-between, as if you were the hyphen in the word phrase ‘fall-winter.’

About half of Hutchinson’s book contains images of individuals as portraits with only a smattering of crowd shots. They appear to be in the midst of talking or pausing, insinuating a kind of silence after someone has said something crucial or strange. These are the kind of chats you have that turn and twist or fall off into a reflective abyss. The reader may imagine these are people preparing for a party, at a party or it’s the after-party hangout. Intriguingly, they are photographed very cleanly and almost innocently. There is nothing slick or sleazy about the young individuals—opposite of the debauchery shots one would expect from Berlin or rather, the anonymous urbanscape Hutchinson is depicting.

Then, he occasionally posits a person or object in nature–usually a meadow with long grass and tiny flowers or, something with trees on the street. The humans seem almost unnatural surrounded by nature. One memorable shot is of a lush carpet of yellow flowers with a figure in the middle. The person is in a hoodie with the words ‘Nazi Hunter’ emblazoned on the back of it and an upside-down Nike-style swoosh, walking towards an orange tree. The human infects this nature idyll.

The blocky-1970s buildings stand like sentinels. Watching. Throughout, we get a series of security mirrors at subway stations or on the street. Observing. The mirror scenes are mostly devoid of humans. Then, every once in a while, there’s a snap of urban decay i.e. junk pile mixed with old mattresses and a pidgeon walking through it or a clutch of dirty, white lawn chairs or a juicy, partially-eaten roast chicken (this one, I can practically smell). Sometimes, he utilizes a small rectangular mirror, photographing it in various spaces that speak to urban abandonment or detritus. With the prose-talk (at times with a hip-hop swagger and rhythm) in between, Hutchinson rounds out the reader’s experience, providing a witness to urban life.

Excerpt from ‘a city in summer’

I see the lights of the cornershop grow dark/see the days lasting, while the nights start to pass/I watch your two little brothers smoke/have a laugh in that secret place they go/

I see a face I haven’t seen before on some morning/enjoy the view, there’s no more longing/look around bare blankets and silent tiptoes/the puzzled gaze when things start to grow

While there is a happenstance to some of the pictures, others are quite precise in their simplicity. Is this spontaneous street photography or carefully composed images? It’s a special style he’s created, a crafted in-the-moment sensibility.

What I’m left with from ‘Pictures and Words’ is this strong image: Two figures in hoodies, one in dark green and another in faded rose, partially embracing against a pitch-black background. The pair, dwarfed by darkness, are located in the lower-corner of the picture. The couple stand like hopeful beacon of light against the black as if defying the environment. I get the sense of both distance and intimacy in this shot. It’s a beautiful image of the everyday—emblematic of the kind if photography Hutchinson practices.

Hutchinson’s book cherishes the urban experience. Though the subject matter in his photos seem mundane, it is elevated through his craft. The prose lends personal flavor to the images, which symbolize sacred daily experiences. He’s produced a kind of story without plot. When you get to the end of the 116-page book, you come to realize the black hoodie person is perhaps as exotic and precious as the flower.

if time passes as compressed bubbles

if you lose the lightness of those early days

if the magic fades

because there’s this and that bill to pay

there’s this education you should gain

that ought to fill you up with something

there’s this phone that keeps buzzing

and the news you keep watching

that flat you were buying

the new car you’ve been driving

there’s these words you keep saying

empty from anything daring

the chit-chat we’ve been having

sorry I forgot to be laughing

now been a pleasure to be here

what’s missing is you though