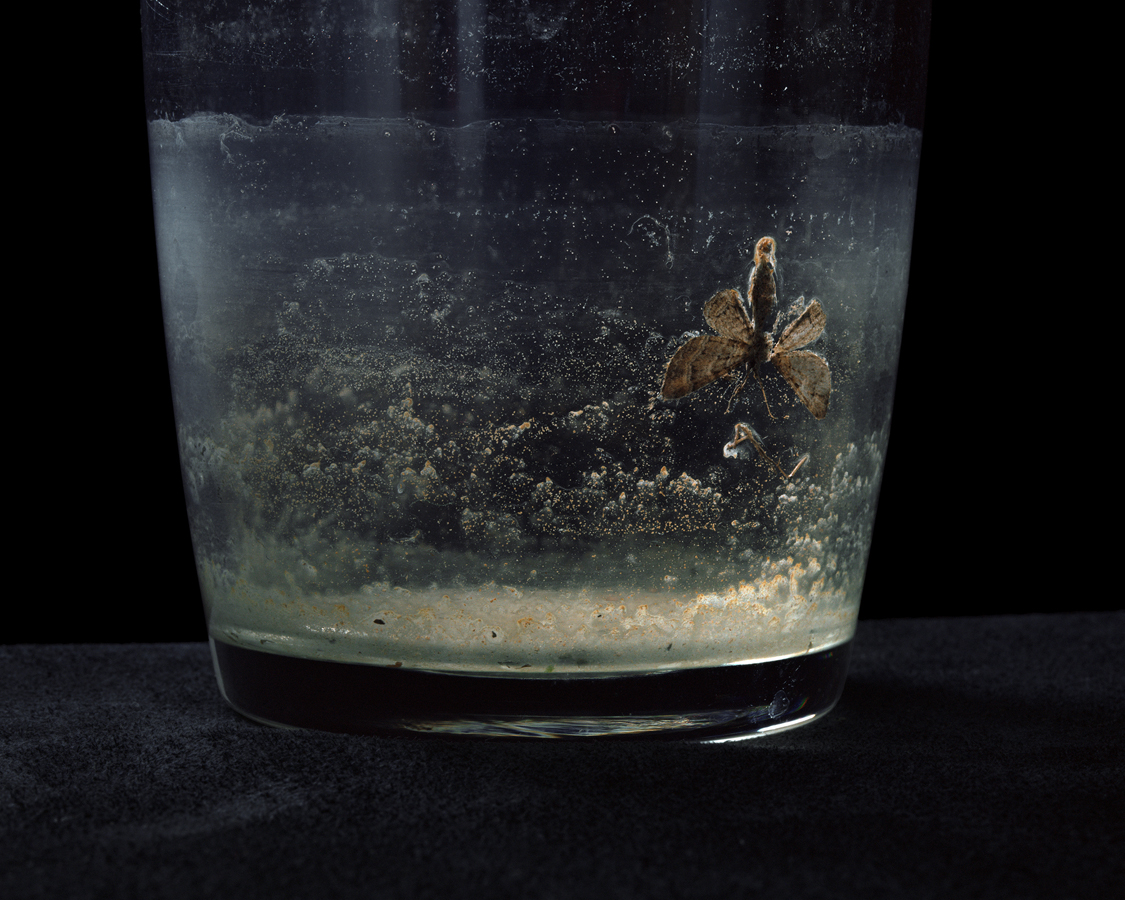 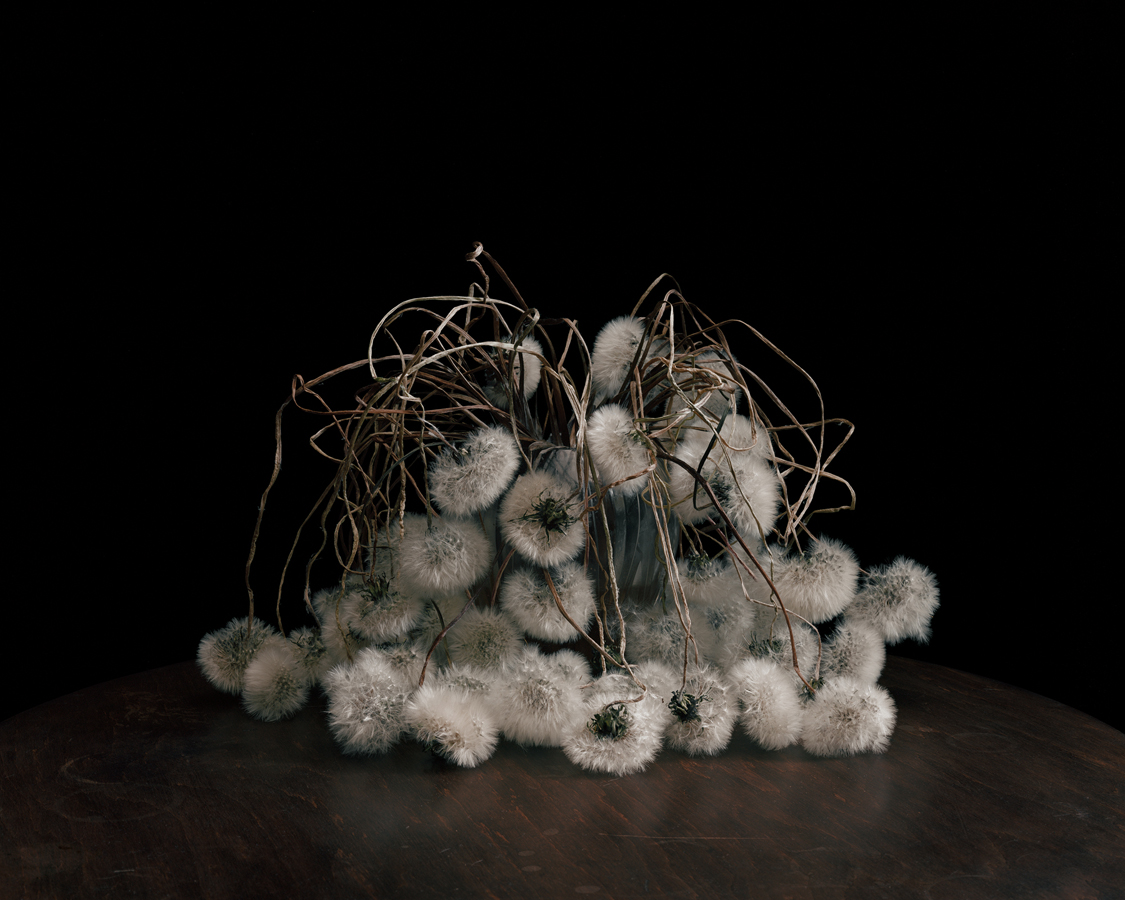 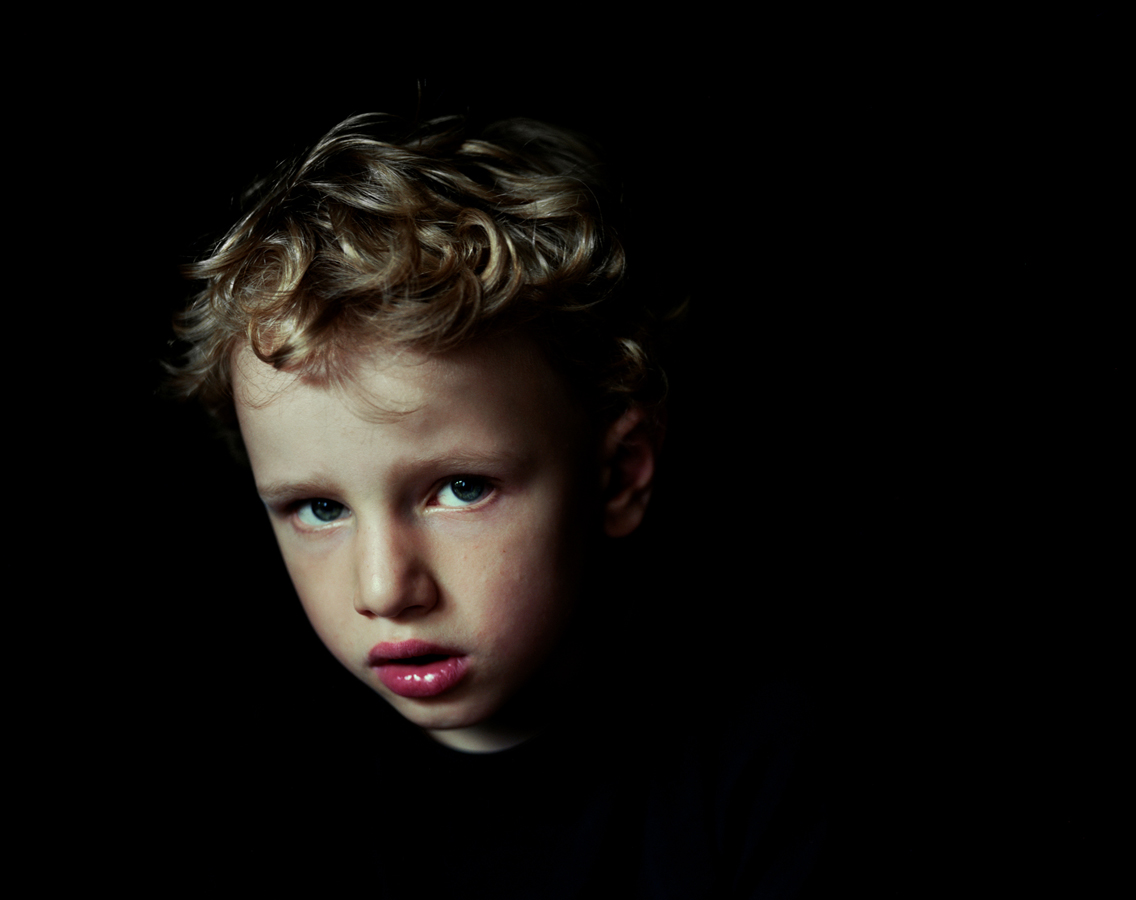 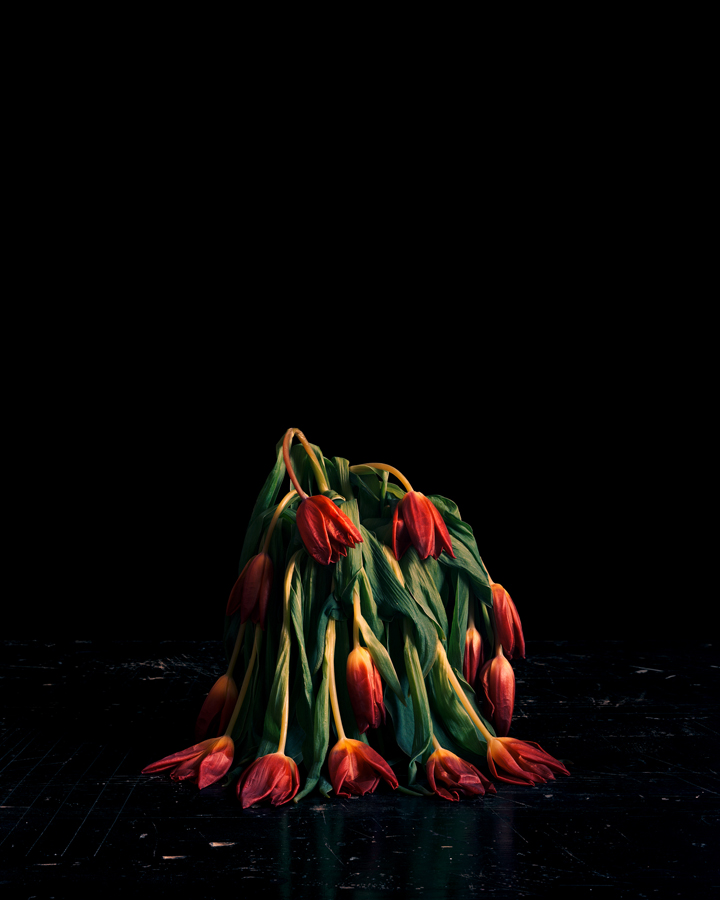 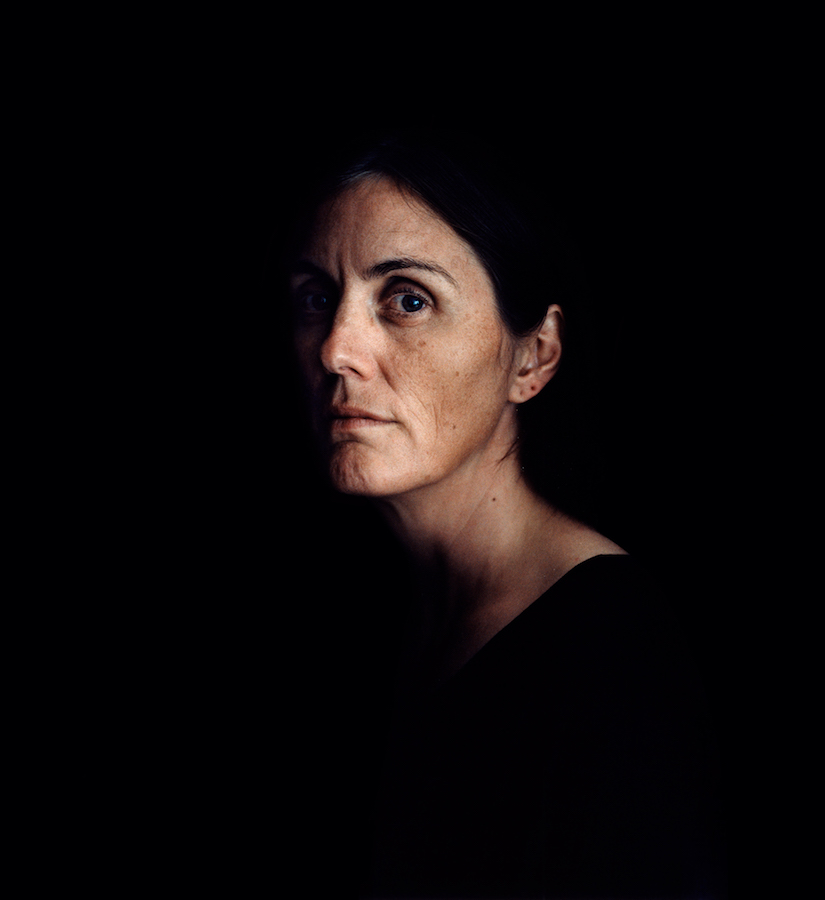 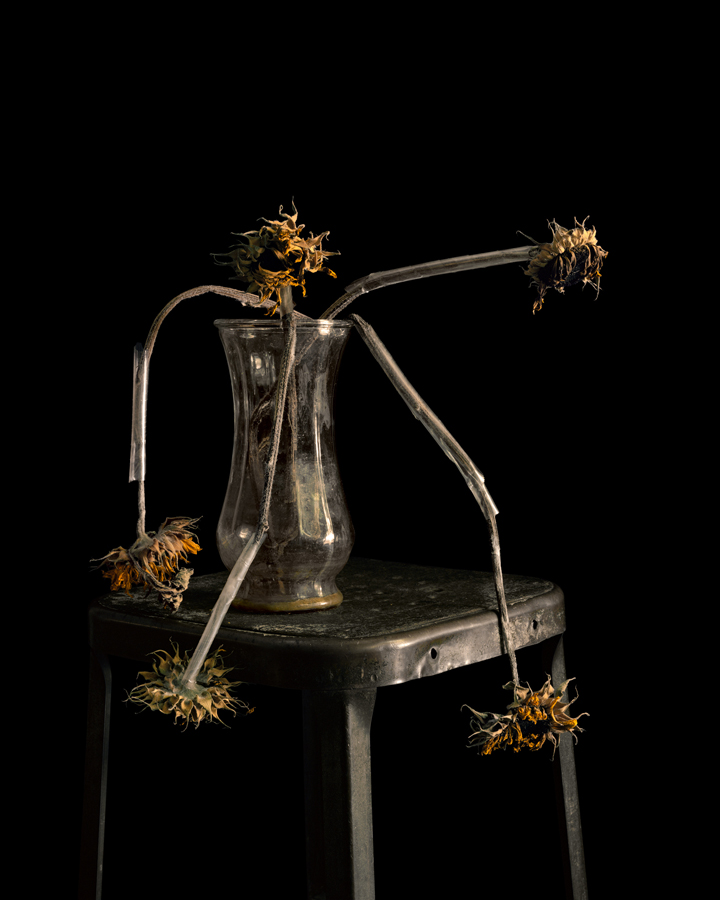 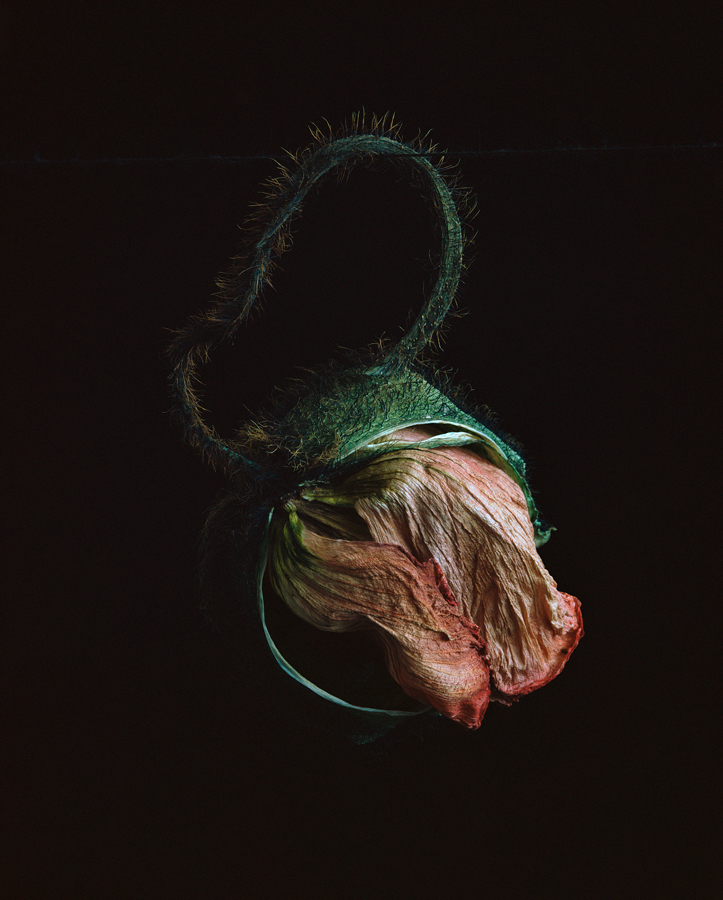 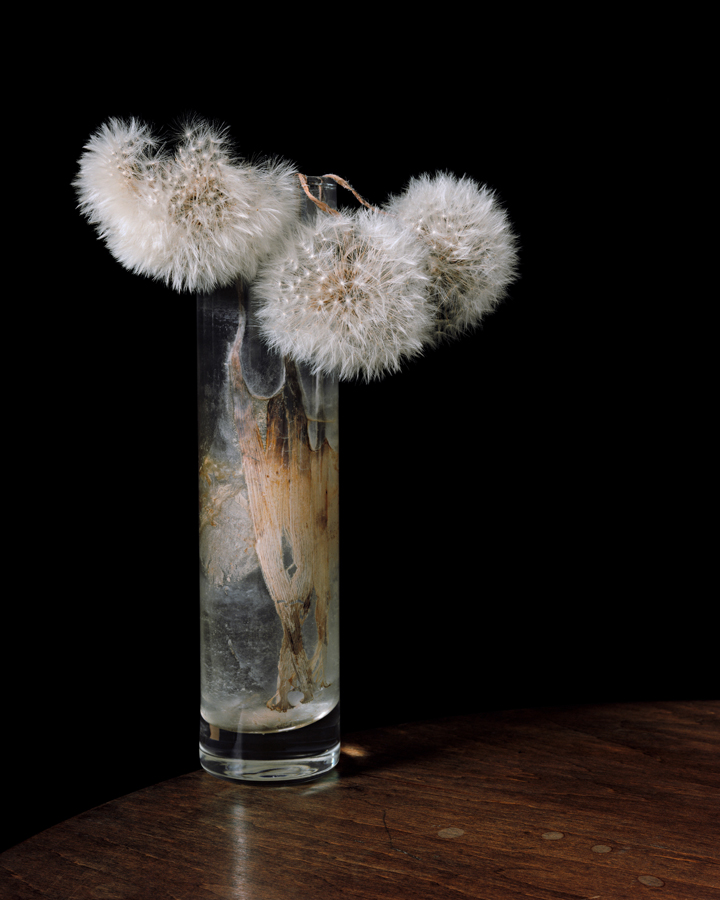 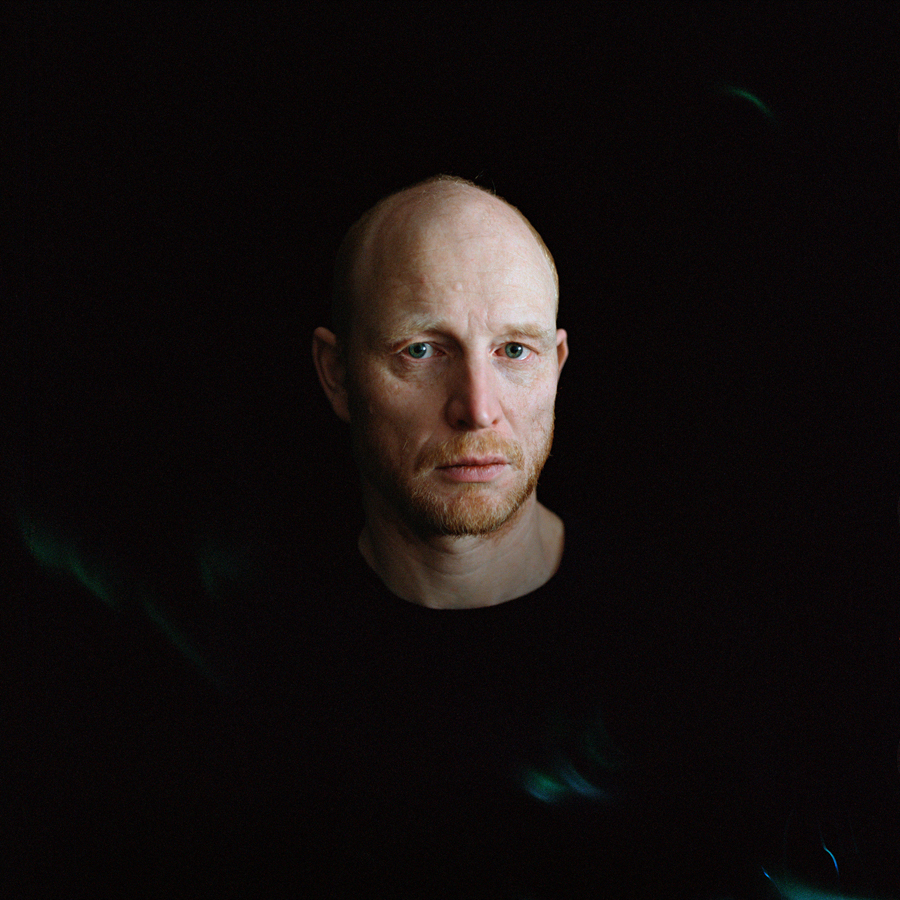 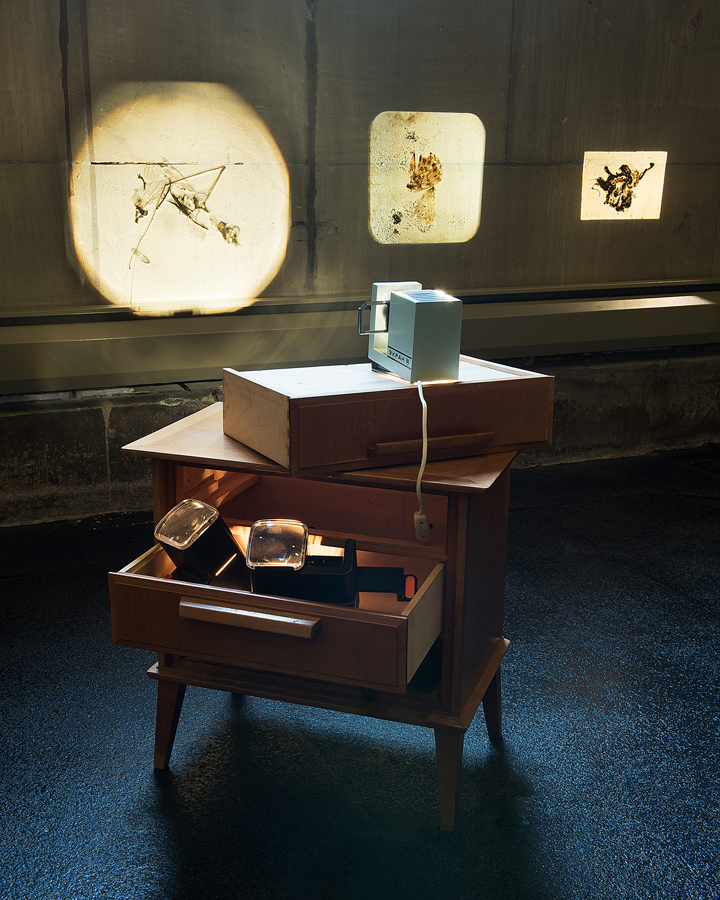 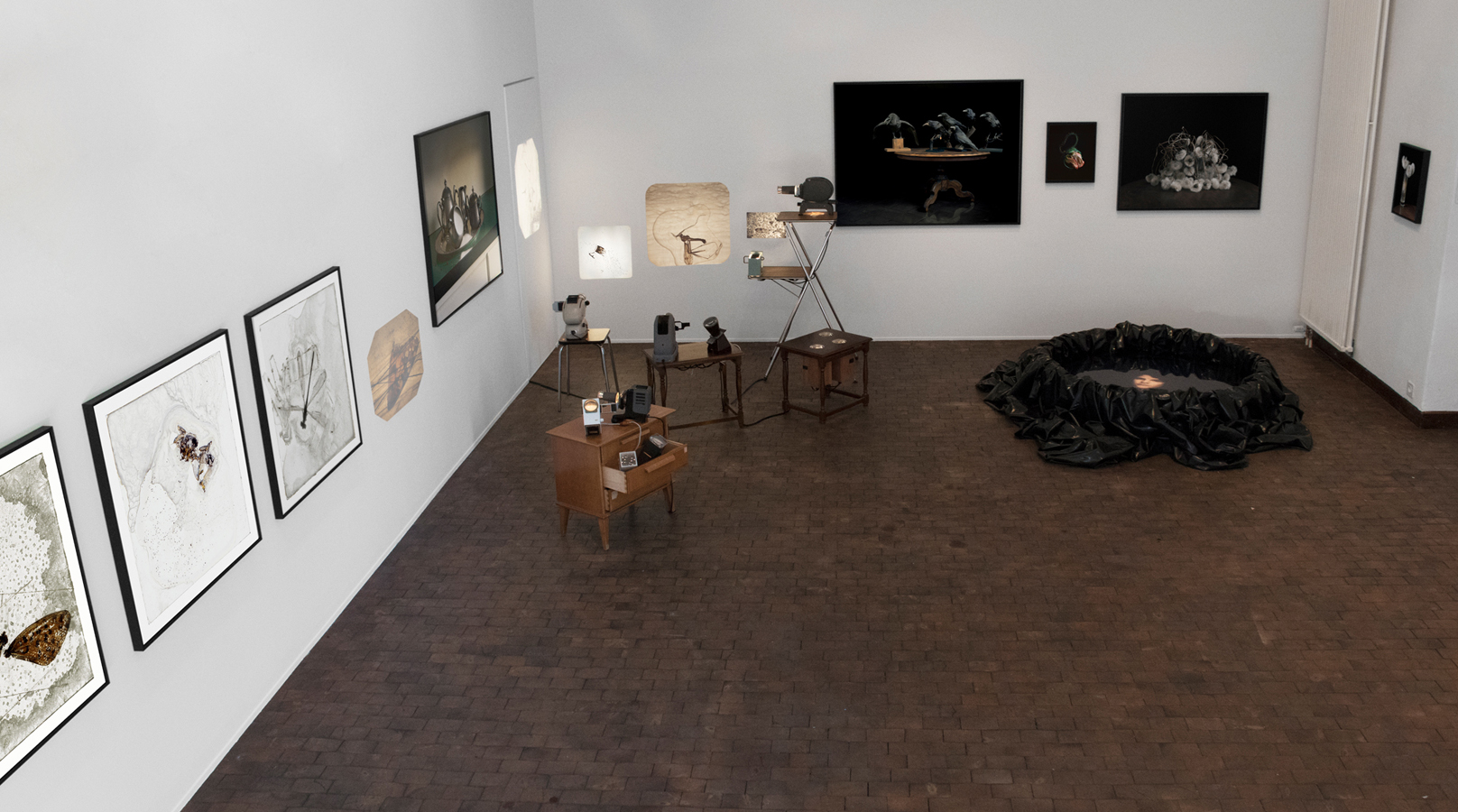 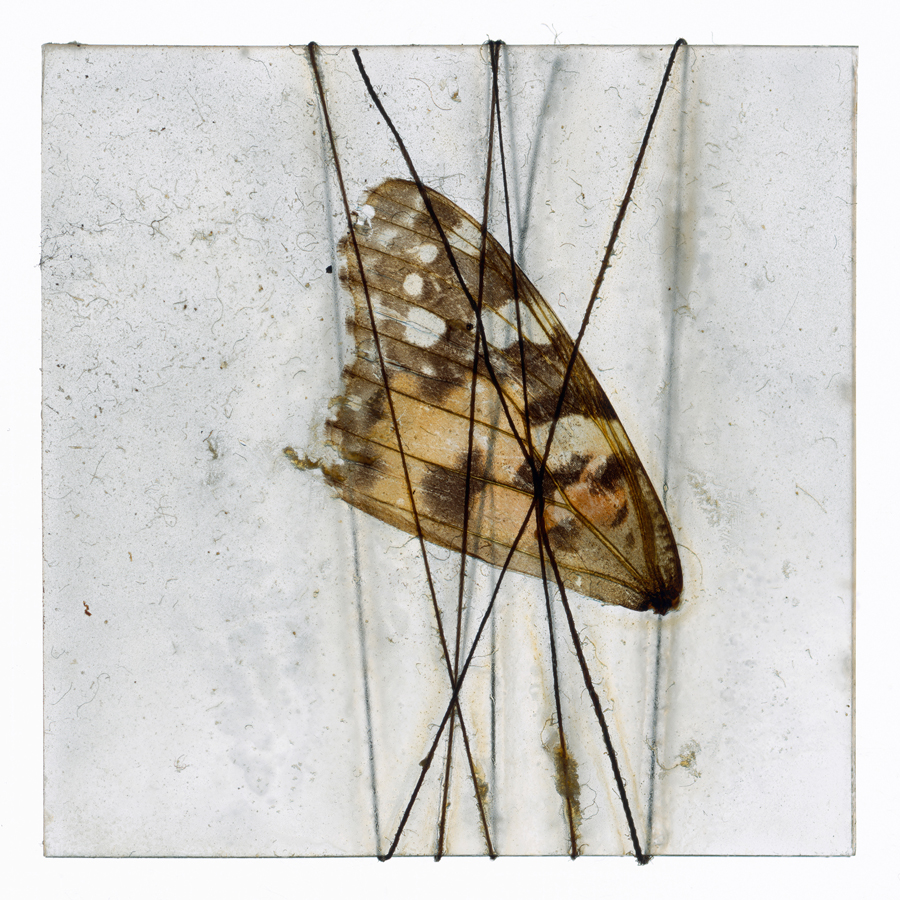 Brigitte Lustenberger’s photographs linger in the delicate moments that hover between life and death—framed glimpses memorialized in a photo. The Swiss photographer’s works have a shadow quality, calling into mind the sensibilities of Old Dutch masters. She plays with the gaze: perceptions of what you are seeing and how the viewer—as a voyeur perhaps—may overlay their own story about the image.

This year, Lustenberger’s multimedia installation “This Sense of Wonder” (featuring dead insects and decaying flowers) captured the 7,000-euro Merck Prize. The Merck Prize was awarded at the 10th Darmstadt Days of Photography.

The Swiss artist, represented by Christophe Guye Gallery, has exhibited internationally including solo shows at the Musée de l’Elysée in Lausanne, Le Maillon in Strasbourg and the Walter Keller Scalo Galleries in Zurich and New York.

Her numerous accolades include the Golden Light Award and the Prix de Photoforum PasquArt as well as being bestowed the highly-regarded Swiss Landis & Gyr Residency in 2013.

Lustenberger studied Social, Perceptual and Photo History at the University of Zurich, her hometown, and eventually found her way to art photography, picking up an MFA in Fine Art Photography at Parsons The New School of Design in New York.

She spoke to June Chua from her studio in Bern about her fascination with film noir, flowers and portraits.

VTph: You started in documentary photography so what sparked your move into fine art photography?

Brigitte Lustenberger: It was an unconscious choice. I started with portraits and at one point, as I was making a picture of this person, Mrs. Smith, it just wasn’t her any more. The portraits are a good example of this—you don’t find out much about the person in the picture whereas in a documentary photo, you put a lot about the person in the frame. So, I started with subtle gestures [i.e. a facial expression, a pose or action], which imply something. I like to trigger something in the viewer.

I work with friends, family and friends of friends. I don’t collaborate with professional models. Usually, I see a person and that invokes an idea in me and I think about a scenario.

I’m rather quick the day I take the picture. Because these people aren’t trained to work in front of a camera, there is a short time when they are alert. I tell them what they should think about, or something that’s happening in front of them to provoke a reaction.

Most of the time it’s quite easy, only rarely has it not worked out. I try to make them as comfortable as possible so they are willing to give me what I need.

When I think up scenes, I think it has to do with memories of films or novels or fairy tales in my head. This is my visual pool, playing in my mind. I think of these as a collective memory we share—from the same children’s books or shows we all may have seen.

VTph: Your photos have a filmic touch, as you say. How did this come about?

BL: I was the youngest of three in my family, so I got to watch a lot of TV. My photos deal with film noir. I watched lots of whodunits and crime films and Agatha Christie’s Miss Marple movies as well as Hitchcock, who has a lot of influence in my work. Specifically, the lighting and when you see his film stills, you can sense there is a story of a before and after.

My other influences are Orson Welles, Guillermo del Toro and Francois Ozon and especially Wong Kar-Wai, who is the master of the single image. One of my favourite shows in the last years has been “Penny Dreadful.”

I use a lot of visual tools like a filmmaker. I keep in mind what Hitchcock said:  You don’t show the explosion, you only hint at it. So, I’m only showing minimally.

VTph: Does your documentary background still figure in how you make your art?

BL: When I was a teenager, I wanted to be a documentary photographer. I saw what was happening in the world and wanted to capture the violence in order to prevent it. In my twenties, I was studying history in university and one of my focuses was on National Socialism and Fascism in the 1930s and 40s. I saw “Shoah” and “Passenger” and photos of the violence from the Holocaust.

At the time, I was doing a lot of street photography and wanted to make a story about street children in India. But I was being brought to people to take pictures of them and I could tell they didn’t really understand what was happening. I realized it was not my thing—just to depict what I saw.

Now, I see that much of what I do requires a kind of documentary attitude—you plan ahead but you have to adjust to what is happening in front of you.

When I make my photos, I have to alter what I do if the light changes, or perhaps the clothing just isn’t working out.

There are a lot of things which I don’t have under control and I have to work with what I call the “accidents.” I still love that. I love to bring this all together and the surprises are still for me a great ‘wow.’

VTph: This style of portraiture you do is very specific, can you expand on that?

These portraits don’t show much, it’s really about me and the person—the person is looking at me. And, who am I looking at? This act—what does it do to people? What is this gaze? There is a tension between absence and presence. The image can be quite aggressive that way.

It’s the ambiguity of photography that I’m interested in, which is related to the founding myth of photography—that it creates truth and that it doesn’t create truth.*

It’s the light trace. That’s the motivation to make a portrait.

VTph: And talking about how you use light, your works have a flavour of the Old Dutch Masters. Is this conscious on your part?

BL: Yes, I do think of my work as Baroque. Though, it is not spectacular, it is spectacle. It’s really the mood of those masters that I have picked up. For instance, my withered flowers hint at transitoriness, the beauty of decay and of growing older and the fragility of our world.

My portraits definitely have a look that recalls Rembrandt.

Baroque paintings had a lot of symbols, hints in them. If you lived in those times, you knew that. Butterflies and snakes had meanings and they worked those images into their paintings.

For me, it’s about the image, what it hints at and what it triggers i.e. the memories and images that tell a story in your head.

VTph: Your works circle on decay and death, why is this a focus for you?

BL: I enjoy all these films about death and suspense. I love drama, I don’t like comedies.

When I was a teenager, several people sort of close to me died. There were a few teenagers who died in accidents or committed suicide. They weren’t my best friends but they were neighbours or my best friend’s sister. In a couple of years, there had been a few tragedies and this had an effect on me.

Death always had a hold on me. And I consider what we think about death and how we don’t deal with it. How it is depicted in religious paintings, press photos and films. It’s interesting to think about what we are allowed to show and what we aren’t.

What is it that troubles us about death? What can you show that is not cruel or cruel?

VTph: Your subject matter has now widened from people and places to flowers and insects—describe how This Sense of Wonder came about?

BL: It was a dead fly—I found it in my studio. It still had legs and stood there like a living fly. I put a glass on it. I put it aside. Then, it was getting all eaten up by little bugs! In a couple days though, I saw how beautiful it was as it decomposed. When I took away the glass, you could still see the circle it made [around the fly].

It looked repulsive and still really beautiful. It compelled me to start working with insects, just as I had worked with flowers. With photography, you can see details that you don’t see with your eye like the tiny hairs and the green eyes.

I put the insects on a slide. They have this semi-transparent quality when the light goes through it. It’s mesmerizing.

We always think that photography preserves, captures everything but what we see in front of us is fading, too.

For the installation, I wanted to get away from just hanging the pictures, to work with light devices. I built a light table with magnifying glasses. The images are shown as projections or prints or as sculptures on light desks.

I also put portraits in water, they started to dissolve as well. I made this little pool and put the image inside and after 24 hours the black dots turn into orange or yellow. The emulsion is coming off the print. The result is like [Shakespeare’s] Ophelia and the person is staring right at you from the pool which makes it disturbing to the viewer.

I felt with this installation I was combining my old practice with new methods—like assembling the breadth of my work in one exhibition.

I like experimenting with new methods but they still focus on the same topics. At the moment, I’m interested in nudes—both men and women. I’m trying to figure out how to present them in a different way instead of just hanging pictures on the wall.

VTph: Now that you’ve ventured into featuring non-human objects—do you approach them differently than the people you photograph?

BL: This is going to sound silly but, flowers don’t talk. I wish they would listen to me like the people do! It’s easier with people.

The approach is similar. I have to work with what’s there: whatever the flowers look like or, whatever these people are like the day I photograph them—they are not actors.

When the flowers are dry, they are more fragile and you can’t do much with them. I can’t force it and if I can’t get what I want—just like with people—I have to let them be.

[The difference with flowers though] is that I can watch them decay. It began when I had two bunches of the same flowers: one set was blooming but the others were almost dead. I thought the decayed ones were beautiful. I love a tulip when it’s gone limp, much more than when it’s healthy. The process is quite subtle, the texture of the petals is so exquisite.

I experimented with bringing dandelion flowers, when they had yellow petals, home and then waited. It was incredible. When they bend down, get wrinkled and get really fluffy and white—it’s like new life!