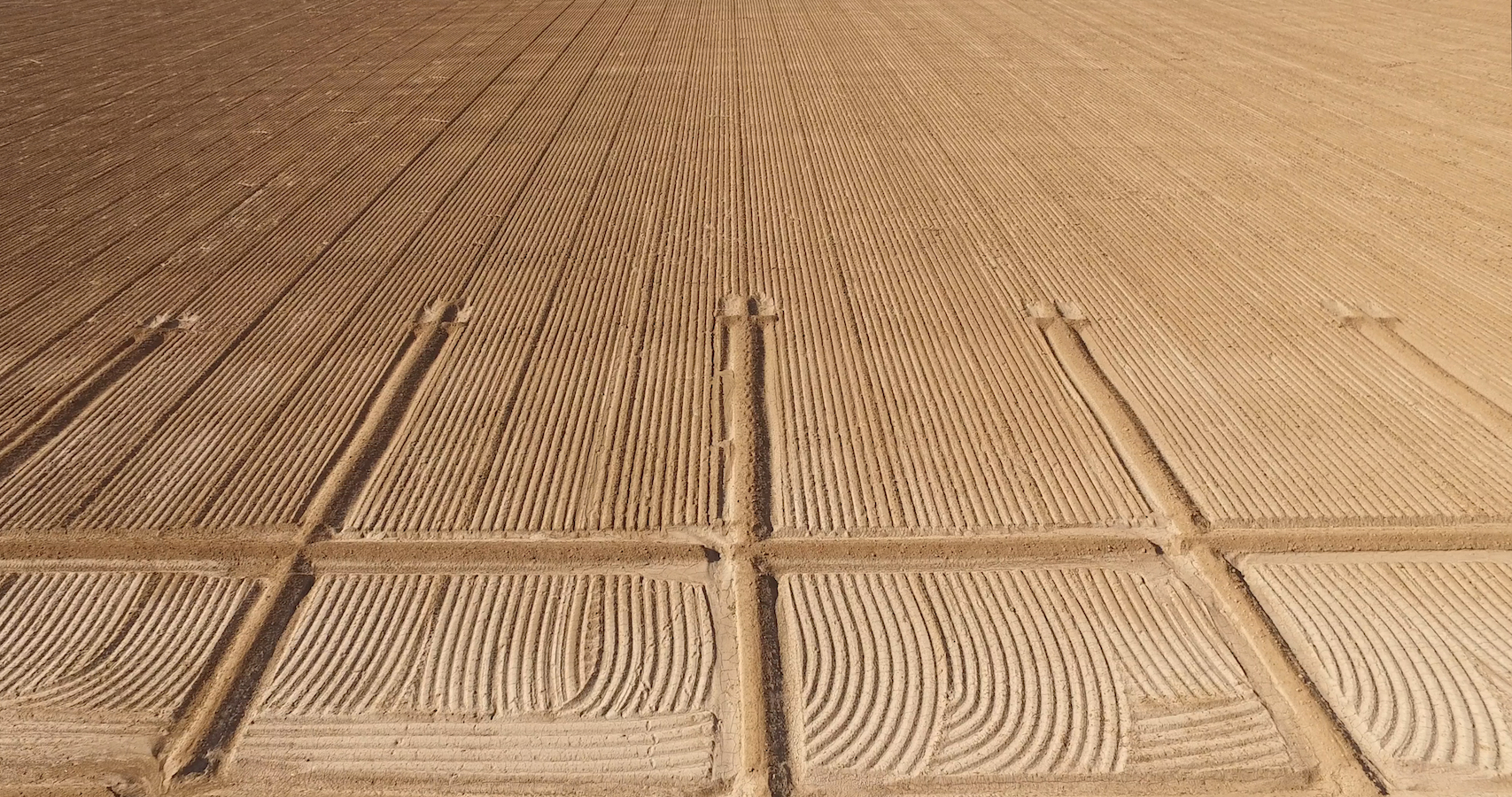 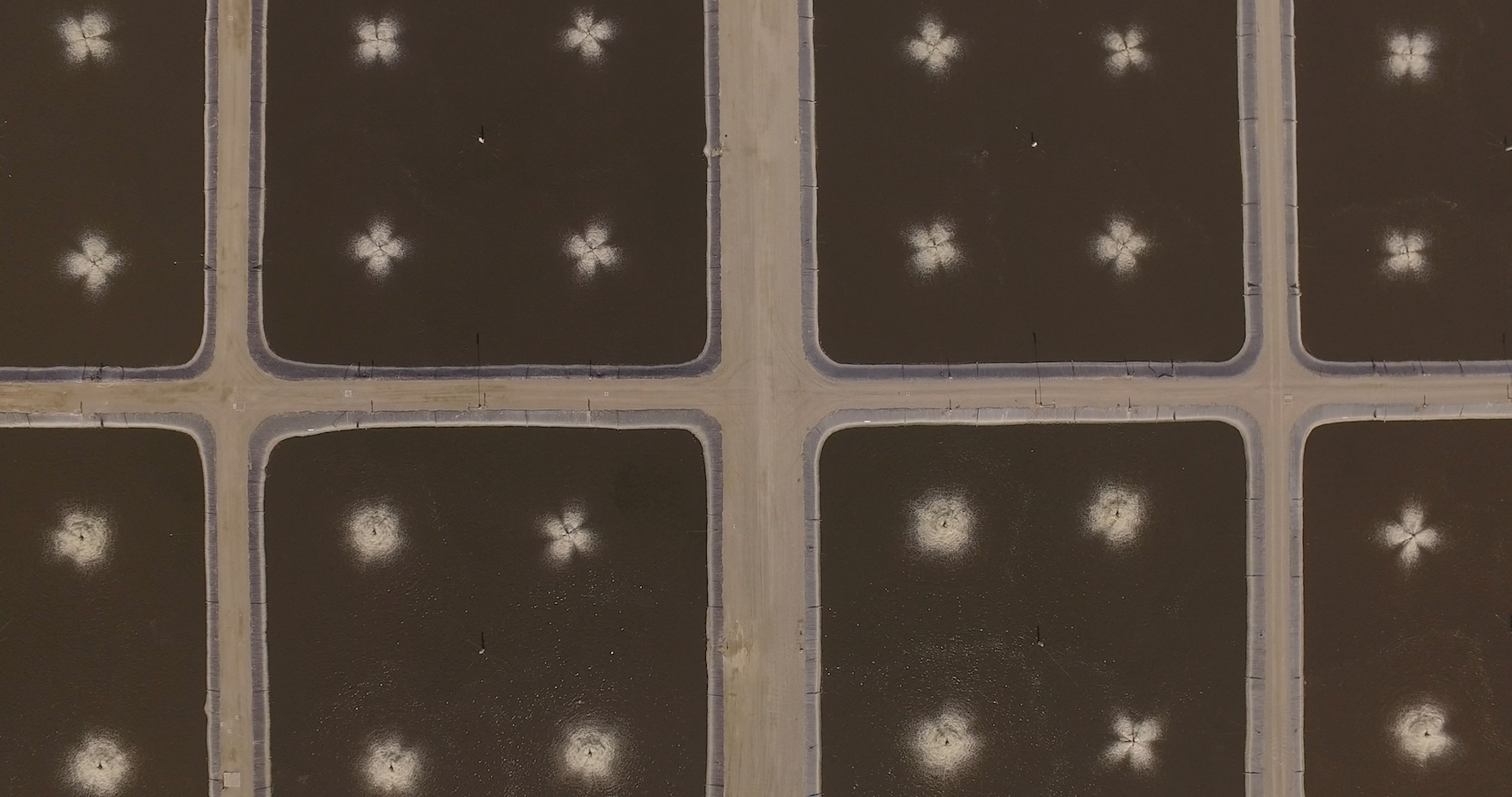 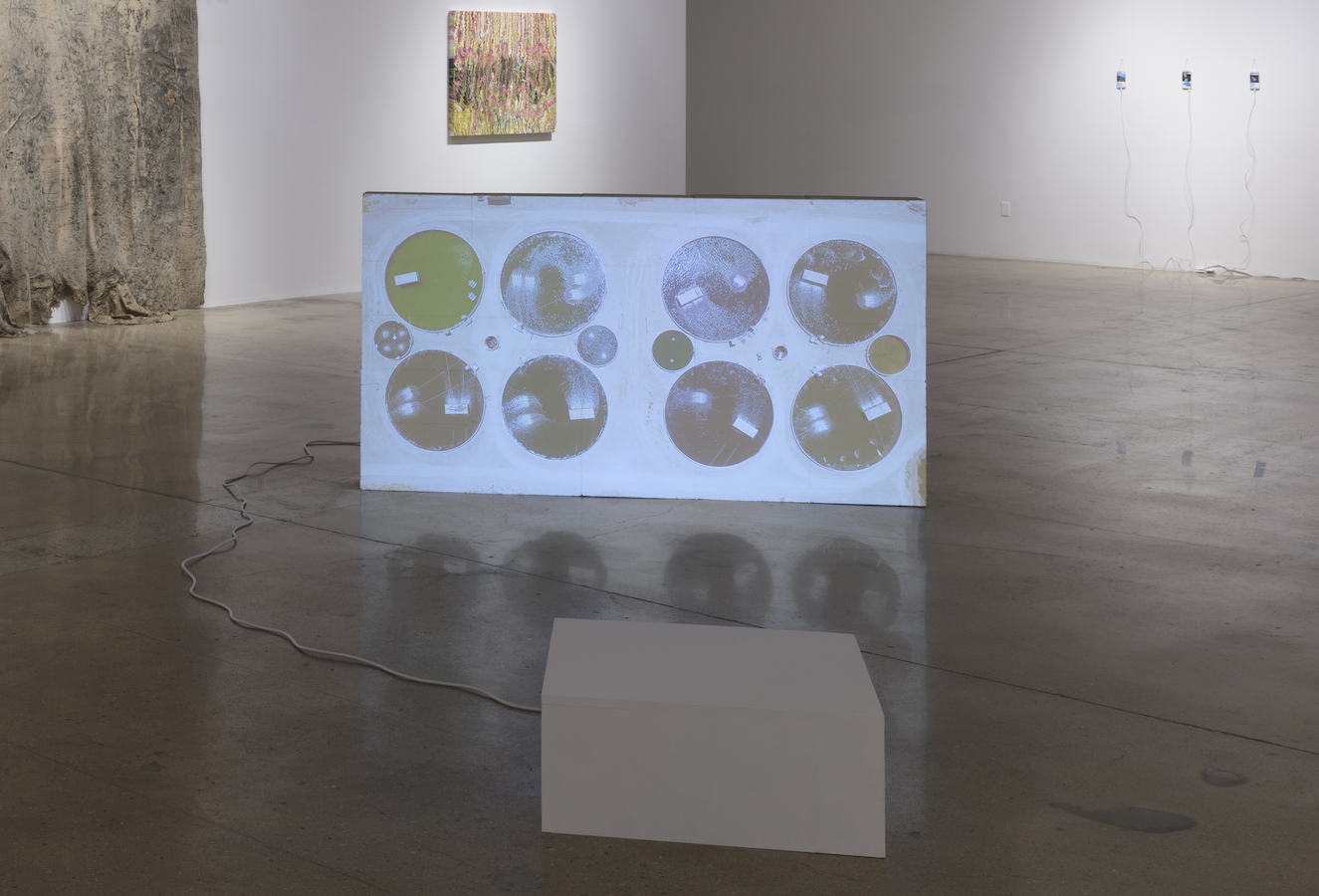 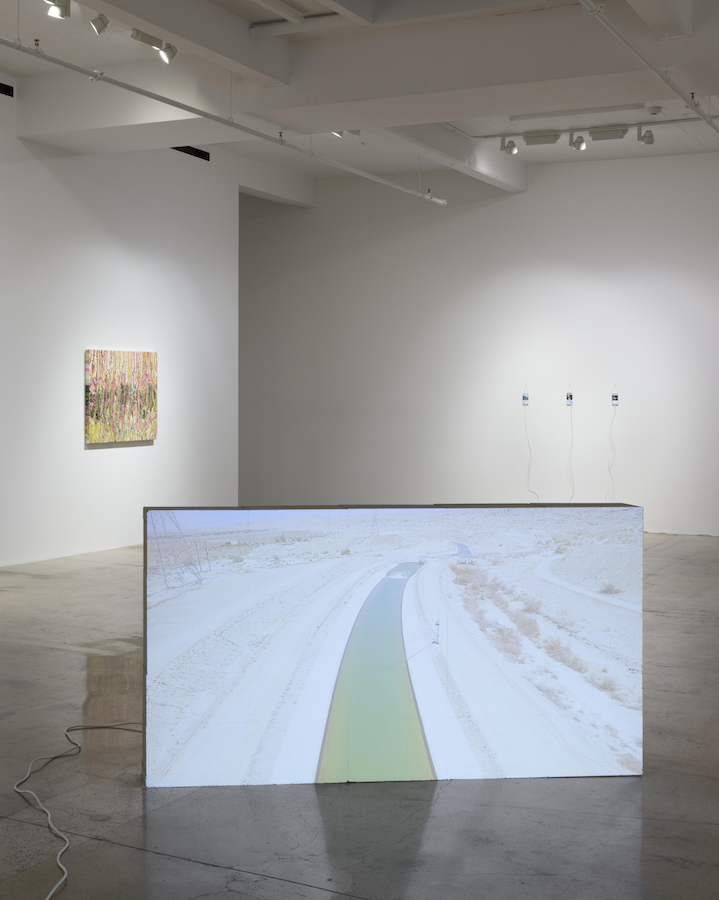 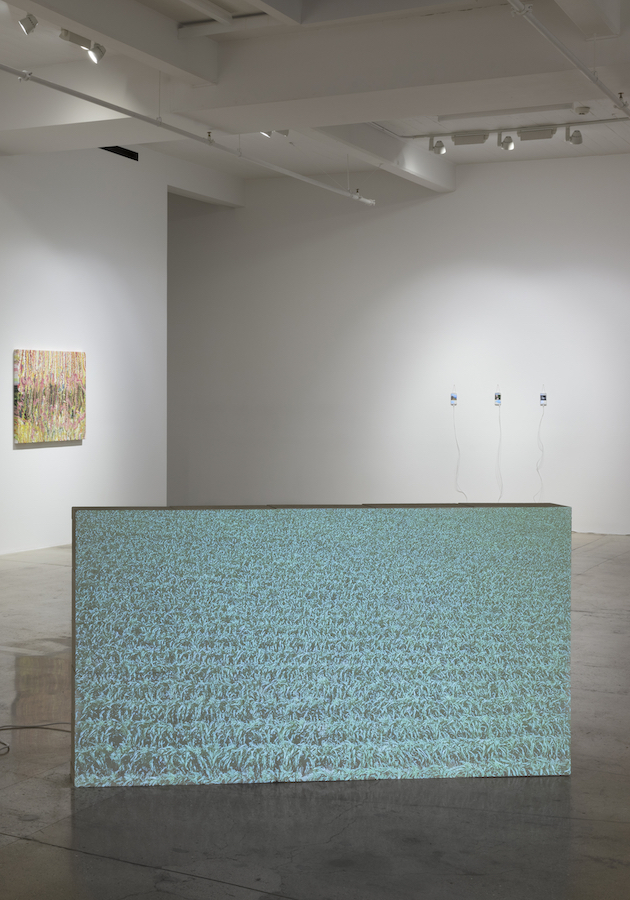 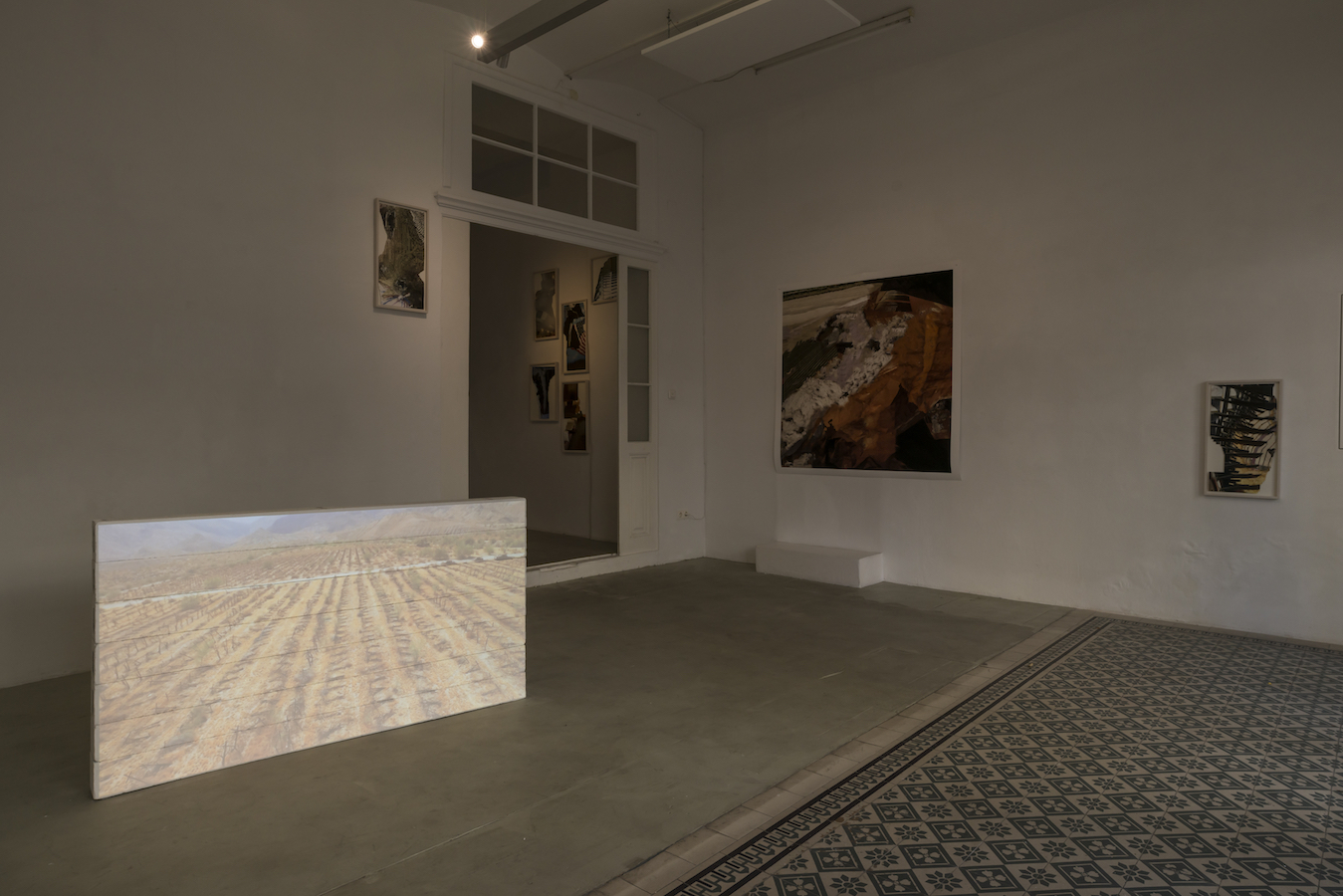 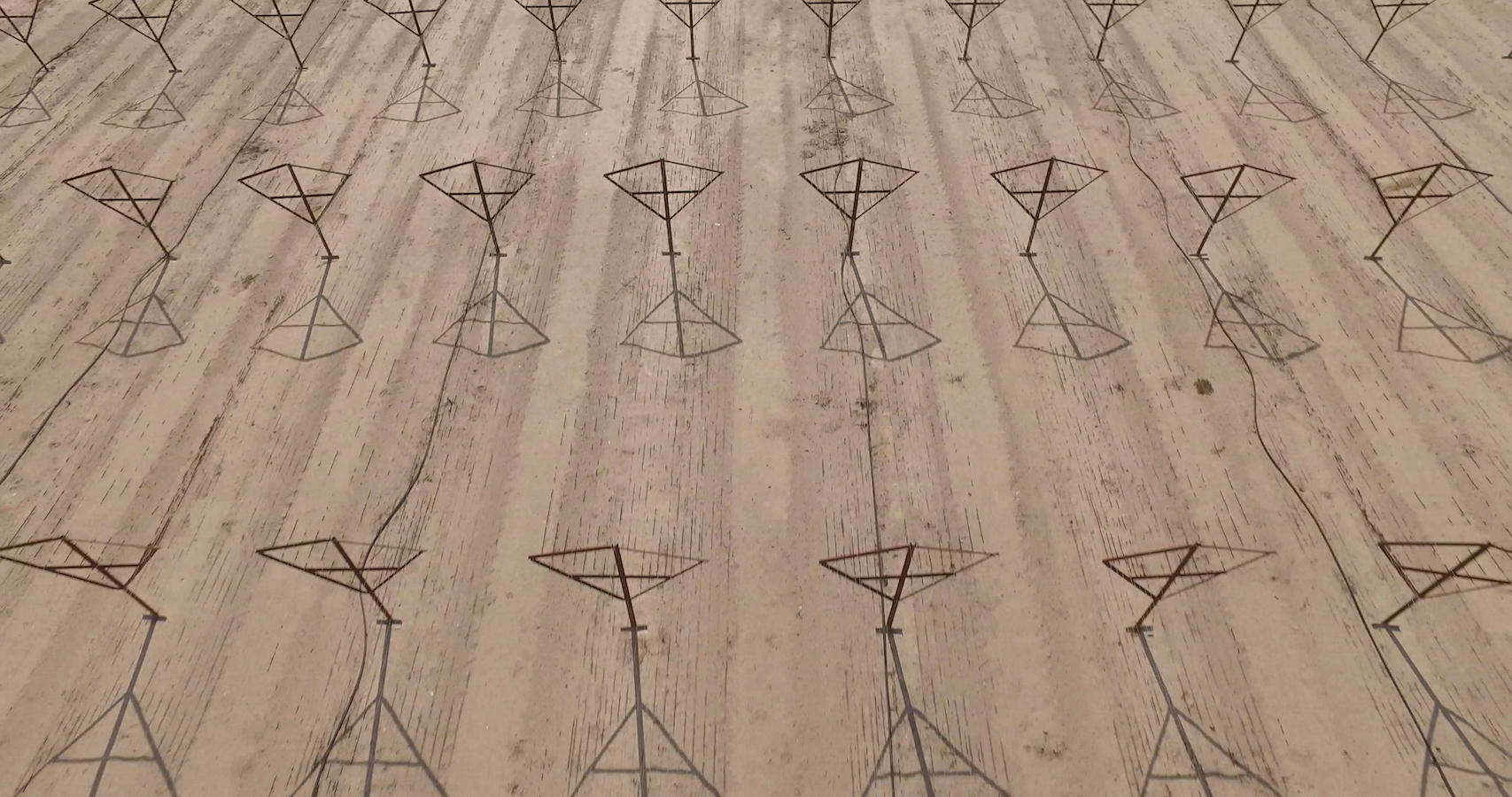 He had the world premiere of his latest work Imperial Valley (Cultivated Runoff) at the Berlinale 2018, which featured stunning aerial videography of a wasteland in southern California. Stretching more than 80 km to the border with Mexico, the area has been utilized for industrial farming for decades. Wastewater and fertilizer flows unfiltered into the Salton Sea (actually a lake). The film, paired with electronic music, is a mesmerizing photographic witness of man-made industrialization.

VTph Visual Thoughts’ June Chua spoke with Marxt while he was in Los Angeles setting up his Imperial Valley installation. Marxt plans to continue filming in the region.

VTph: You studied geography, how does that influence your work?

Lukas Marxt: I studied it for one year, at the beginning. I picked geography in part to fill some space as I was waiting to begin at the art academy. However, that question does come to my mind and I think it is connected subconsciously, there is a definitely a link of interest. It’s about the places we live, how we connect to our surroundings and where we have been. The connection between nature and human—how far we have gone to work with the scars and ruins which remain.

I give space for people to dive in. The images are so monumental—it’s about the size i.e. Human vs Nature. You have to place yourself in this image. You have no reference of human beings, you have to connect to the place. What are we, where are we going, what is actually happening there.

VTph: Imperial Valley—how did you come to film that and why?

LM: I was shooting another film in 2015, in southern California and I accidentally discovered the Salton Sea and Imperial Valley. At this time the Salton Sea had an enormous fish die-off—which was incredibly disturbing and I instantly knew I needed to do some work around this area. So, I came back in 2017 to shoot Imperial Valley (cultivated run-off).

I started looking for the cause of the problem, and I have found out that the seabed is totally toxic from all the agricultural run-off and the massive agriculture industry in the north and south of the Sea. The Imperial Irrigation District stopped supplying the Salton Sea with extra water so it will dry out much faster and be completely dry in the next 20 to 25 years and this will cause a major health problem. That’s because when it is dry, it will carry all the dust and toxins from the seabed, southwest to Mexico and also reaching Palm Springs and even Los Angeles, which will affect a lot of people.

For Imperial Valley (cultivated run-off), I started with a bird’s-eye view of an irrigation canal cruising through the desert landscape following the streams. I started first in Coachella Valley, showing this massive cleaning system which reuses the water. Onwards in the film, you see the water containers used to grow fruits and vegetables and then, [the film] dives into the abstract-looking monocultures [of orchards], one or two more times you’ll see sources and traces of water before [it totally disappears from view]. It’s so vast and massive that very often vineyards are left behind. Paradoxically, it seems that it’s easier to fertilize the next set of hills instead of taking care of the ones that they’ve used already. They just are left there to die.

VTph: The images are grandiose and beautiful but it’s of an environmental catastrophe-in-the-making—why would you make it so ‘nice’?

LM: I think it’s very important for the work that it carries this big irony of beauty and devastation. We are more and more getting super interested about this kind of [aesthetic] structure. I was already working in 2012 with an oil rig in Northern Sea, I filmed the beauty of pumping oil out from the earth which is not nice and its penetration of the earth. It makes you, as a spectator, wonder about the beauty on one hand and also that it’s not beautiful at all. In Imperial Valley, it’s how we perfectly construct these fields, it’s the peak of industrial food growing. It all just looks nice. It’s about the contrast, the juxtaposition and irony.

VTph: You had the first launch of the film at this year’s BERLINALE, how was that experience for you?

LM: I felt it was good audience reaction, we had a good talk. People had this provocative feeling which I tried to do with the sound score which it totally artificial and brings you closer to this environment. There was this critique: using bird’s-eye view or the ‘God view’ and it seems like you’re not even there but you are seeing this irony and beauty but not landing [and being in it].  And this is why I’m back here [in California] again, it’s such an important topic. I can highlight the issue from different angles. When you ground yourself and shoot from a human perspective it will map out the topic from another layer. For me, this was just the beginning of a longer journey about the Salton Sea and its different aspects.

By the way, I’m focused on its history. It’s not exclusively about the food growing. It was used in the 1940s for the testing of atomic bombing, training the ballistic behavior of the bomb. It also has some ruins. It has so many diverse layers—different layers got violated and mistreated. There have been historical events at the Salton Sea and [I’d like to examine] the idea of leaving it behind and not caring what the future will bring.

VTph: You have a particular cinematic style—like filmic still photography, a sense of monumental experience but it’s melancholy and lonely with very few humans in your works. Why?

LM: There is a practical reason. I am a one-man band doing everything alone—travelling alone, you get this feeling of loneliness. I’m searching for places which are left behind. We are living in the post-apocalypse. The style for me has to do with a kind of still photography shot but because I don’t do photography at all, I would not feel confident taking a picture of the things I’m interested!

The most important component is the perception of time. [My films] give space to reflect. They allow every person, based about your past, to reflect on what you connect with it. I’m giving you so much time and that means I’m wanting a lot from the audience, you are thinking for yourself, nothing is given to you. I’m treating my films as a portal, to places where I’ve been to make it as close to the original. You have the feeling of being there.

I did one film where I studied different thunder storms, everybody has very personal connections to that. I discovered that everyone receives that film differently.

The good thing in film or installation—you have the frame and you really look at it, you sit there. If you are actually outside, you could get disturbed by other sounds, people, whatever. With my films, you have to focus.

VTph: How would you describe your “visual gaze”?

LM: During my studies. I started working by myself because I was interested in travel and observation and one day, someone asked me, ‘Do you know about Land Art—what happened in the 60s and 70s?’ Then, I began digging deeper. I found out about Michael Heizer, Robert Smithson and Dennis Oppenheim. They mostly did installation but I’m doing video. For them the place they photographed was also the place of exhibit. James Benning was also a big inspiration to me. He was one of the first developers of landscape movies in the 1970s. He did very conceptual observations. There are these films called 13 Lakes, where he goes to 13 lakes in California and shoots them for 10 minutes each and that was his way of dealing with the environment and the state of his country. It’s this idea of observing.

There is also my presence behind the camera. In a moment, in High Tide, there is no remains of human but the camera work becomes so important. I stand as a counterpoint to the landscape. You hear me behind the camera, I’m walking over lava fields, you hear my breathing. It’s important to have someone in the space. I’m taking different approaches on how to appear in my films.

VTph: You began using drone photography with Captive Horizon (2014), how does that affect your vision for your work?

LM: I don´t know exactly how it affected my work. As I see it, it is just a tool. Of course, you have new possibilities in how to position the camera and reaching out to new camera angles, but I also grew up with permanent change and technical development, so it just feels natural in using and experimenting with these new possibilities and methods.

I think many people have already gotten used to the aerial perspective, by using google maps on a daily basis and also seeing it in films, documentaries and commercials all the time. I see the challenge by using a flying camera in breaking the conventions of its perspective and try to create a kind of counter balance throughout concerning the persistence of time in the length of the images I offer.

VTph: Natural vs Unnatural environments, what is your approach to them?

LM: They are pretty much the same for me. In Black Rain, it’s the skyline of Hong Kong and there’s this massive storm moving in and changing the whole depth of the city. In other films, I’m in the middle of nowhere.

It’s always about traces—somebody was already there. I’m never an explorer. I’m never the one who has made the discovery. I’m only going somewhere where people tried to settle or started massive industry.

There is melancholy, yes. If I film a forest with no ‘weight’ of humans, then it is just a beautiful forest. But if there are some remains of a human existence there, there is some melancholy, there is a measure of time. Trying something, violating the space and leaving.

VTph:  So, how do you go about choosing the landscapes you want to film?

LM: It comes from reading, news, talking to other people. At the beginning, it was quite easy. I spent three months in a van driving around Austria, Italy and Germany following some storms during the summer.

Then, I always wanted to go to an oil platform and there was this residency with an energy company, so I applied to do work with an oil platform. As well, I had residency about the Arctic Circle. I was fascinated by its remoteness and loneliness.

When I heard about the total eclipse of the sun one year, I discovered there were two places you could go to experience it fully: Spitzbergen in Norway or the Faroe Islands [in the Norwegian Sea and the North Atlantic]. So, me and Vanja Smiljanic, who sometimes accompanies me and helps out, chose to work with the community on those islands for that film.

I’ve only been staying a few weeks at a time in each location and now, I think it’s time to stay longer and create a more thorough, even deeper work in the future.